There are plenty of things to do on Koh Phi Phi and its surrounding islands. It is the perfect place for a host of outdoor activities both soothing and adrenaline driven.

Stunningly beautiful, but much visited Maya Bay is almost entirely surrounded by cliffs. There is one major beach (about 200 metres long) inside the bay and several smaller ones. The sand is powder soft and gleaming white. Maya Bay was used as the location for the film, ‘The Beach’. There was real controversy at the time about environmental damage caused. Between May and October the seas tend to be rough here and boats can’t enter. The snorkeling all around here is great but the place gets very crowded indeed and tourists sometimes outnumber fish. The crowds tend to thin out in the afternoon.

Things To Do On Koh Phi Phi

On the opposite of Phi Phi Leh to Maya Bay this place is similarly dramatic, although long and thin with much shallower water. It is only accessible to shallow draft boats. There is a small beach here although the bay is often in shadow due to the steep cliffs that surround it. There is good snorkeling near the entrance to the bay

North of Pi Leh Bay is the Viking Cave. It is famous for providing the raw materials for making birds nest soup since it is where swifts choose to set up home. The birds make the nests with their own saliva and locals come and harvest them them in spring using precarious bamboo scaffolding to get close to the nests once the birds have finished occupying them. These birds nests sell for a lot of money, mainly to the Chinese. The name Viking is derived from some cave paintings of ships that resemble those of the Norsemen of old, although this resemblance is purely accidental.

It is about an hour’s walk to Viewpoint in the middle of Phi Phi Don. Once you have puffed your way there you will be rewarded by spectacular views of the weirdly shaped dramatic isthmus that is central Phi Phi.

All travel agents can organize kayaking trips and there are many great places to explore along the limestone karsts of Phi Phi’s islands. Kayaking is often offered as a combo with other activities (like snorkelling and visiting Maya Bay) so you don’t have to dedicate a whole day to it.

There are a number of sites around Phi Phi where you can climb high on to the rocks and then jump down into the water. Most tour companies offer this as part of boat tour packages and they also provide special rubber shoes so you can negotiate the jagged rocks. There is no regulation though and the reason it looks dangerous is because it is. You jump at your own peril.

At the far end of Tonsai Bay accessible only by boat is Monkey Beach named after its simian inhabitants! They are grumpy little monkeys though and they bite so attempting to forge a meaningful relationship with them is really an exercise with no future. Given how many visitors drop by to gawp at them whilst they are simply minding their own business may explain their grouchy outlook. Once upon a time they were as virtuous, philanthropic and kind hearted as a flock of little George Clooneys.

There is excellent snorkeling around Phi Phi. ‘Shark Point’ near Long Beach is the place to see blacktip reef sharks, although the swell between May and October makes it dangerous. These are the pacifists of the shark world so there is no danger. Bamboo and Mosquito Island are also good but best when the tide is low and the reefs are more accessible.

Around Pi Leh and Maya Bay are both popular snorkeling spots. Maya Bay is so popular that it often seems tourists outnumber fish. Hin Klang is a good place to snorkel near Laem Thong Beach right in the north of Phi Phi Don. It is a large coral reef that does not break the surface. As with everything in north Phi Phi, everything here is quite classy.

The West side of Tonsai Bay is easy if you are staying in Tonsai Village although the whole aquatic atmosphere is a mite proletarian and some of the marine life is downright uncouth. On the east side of Phi Phi Don, about a 100 metres out is a reef that runs almost the entire length of the island which offers some good snorkeling spots.

There are numerous dive operators on Koh Phi Phi where you can both learn to dive and already qualified divers can explore the beautiful dive sites around Koh Phi Phi. One of the most economical ways to fully explore Koh Phi Phi underwater is to go on a Koh Phi Phi liveaboard boat, which maximises the number of dives you can do over two days as well as saving money.

Less crowded than Railay Beach There are some good climbing opportunities around Koh Phi Phi. There are about four walls which are the most used.

There are many rare bird species on Phi Phi islands. The best time of the year to see them is from January through to April. Species include Gurneys, Finfoots, Bigwinged Brown Kingfishers, Egrets, Bitterns and Herons to name but a few.

You are not allowed to keep and kill the fish you catch on Phi Phi since there is a ‘catch-and-release’ rule. If however you prefer the thrill of the chase to the smoke of the barbeque this policy needn’t spoil your fun. There are black marlin, giant travelly and sailfish in quite large numbers. Wahoo are also to be found from June through to October. You can charter a boat if you are serious since you will need to go far out for the bigger fish or you can hire a longtail if you ambitions are slimmer. 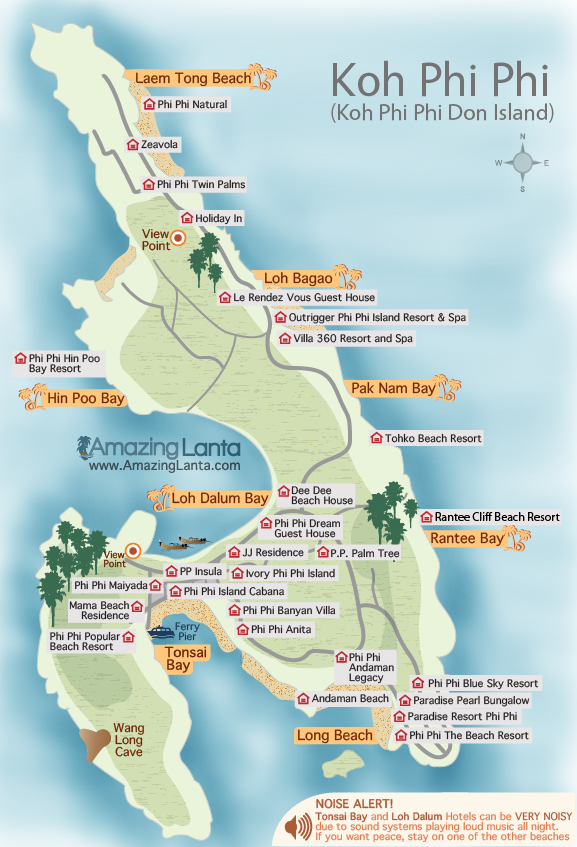