November 2022: Thailand Fully Reopens - No Vaccination Proof Needed.
See our Can I Travel To Koh Lanta page for full details.

Naiyang Beach is mainly famous for being about 10 minutes drive from Phuket Airport, and it’s remained one of Phuket’s most pleasant beaches even as it’s become more popular 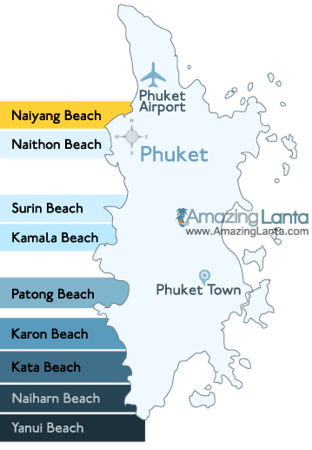 In the far north of the island is Nai Yang beach. It is near enough to the airport that one can sit and watch the planes arriving and departing although one is not close enough to be disturbed by the noise they make. It is far away from being a typical tourist brochure, antiseptic, palm fringed paradise, but it is very pleasant the huge expanses of white sand lined by weirdly shaggy Casuarina trees. Nai Yang was one of the Thailand locations used for the filming of 2004 movie Bridget Jones: The Edge Of Reason, starring Renee Zellweger, Hugh Grant and Colin Firth.

Nai Yang is home to the headquarters of Sirinat National park which contributes to its decidedly rustic feel. One can wander off the main drag of the beach area, and into the empty forest, the soft grass beneath one’s feet. Despite this general lack of development it is still home to some upmarket operations and, as with Phuket in general, is no place for bargain hunters. The beach is lined with the usual complement of restaurants, resorts and a number of dubious girly bars but it rarely seems crowded and it is decidedly un-raucous.

Nai Yang beach offers a range of hotels and resorts the majority of which are in the mid range bracket. There is a small cluster at the T-junction on the road in next to the National Park. This is definitely the quietest area. The others are strung out along the beach on either side of the road amongst the Casuarina Trees.

Thoughtfully conceived, Dewa combines imaginative luxury with the feel of a casbah where winding lanes open out on to gleaming courtyards. There are both pool villas and residential suites. All are are family friendly and offer self catering facilities as well as a private shady dining terrace. The pool villas provide totally self contained peace whilst the resort as a whole has an airy feel where the open, common areas catch the breeze. The decoration throughout is bright and white with a hint of dark-wood boutique and pastel shades in the soft furnishings. It is nicely situated between the beach and the national park.

Although this hotel’s proximity to the airport is what gives it its rather unimaginative name, the spirit of ‘doing what it says on the tin’ at a very reasonable price makes it a very solid mid-range option for Nai Yang Beach. Spacious, light rooms with verandahs at the front surround the swimming pool set within a well kept garden and dotted with luminously purple tropical flowers. It is a little way from the main drag of shops and bars and but it has its own cosy poolside bar and it serves as a very functional refuge equidistant between the beach and the national park. The staff seem a little surly, but we may just have caught them on an off day. With their brick walls the standard rooms may briefly fool you into thinking you are in the penitentiary and you actually done the crime, but to be fair to the warden the cells are really nicely decorated with the standard boutique flourishes of oddly folded towels and flowers scattered about here and there. The hotel is about 30 seconds walk from the sea and you can stroll straight out of your door onto the main beach road where the restaurants and cafes are situated. The owners’ slightly odd taste in furnishings also stretch to dark wood furniture that appears to come straight from a ranch in Arizona which goes very nicely with the dominant pinkish, bricky and generally institutional theme. Add to this the lurid paintings of foliage and landscapes that adorn the walls and you have an atmosphere of punitive kitsch that makes the Nai Yang Sea View Place an island of pleasant oddness

Whilst right in the centre of the Beach area, the Nai Yang Beach is slightly set back in its own little forest. It’s a rambling leafy place with a huge choice of different rooms, suites and villas in its various wings and annexes. Whoever designed this place obviously maintained both light and space as priorities since huge picture windows, cool white tiling and minimal but thoughtful decoration predominate throughout. The grounds are high on foliage and the staff are casually efficient and very friendly. The swimming pool is large enough to swim lengths and the restaurant offers a range of dining featuring the ever predictable, but in this case quite good, Italian menu as well as the usual Thai standards. All in all the Nai Yang Beach Resort is a very well thought out place that fits a range of budgets from the modestly priced rooms in ‘Tropical Wing’ (ranging from 2,500 baht in low season to 4,300 baht in high season) to untrammeled jungle luxury in the Turtle Pool Villa or the Thana Grand suite (both of which are around 7,000 baht in low season and 16,000 baht in high season).

There are a number of smaller bungalow operations right on the beach gathered into one strip that are all much of a muchness in terms of both facilities on offer and prices charged. Dang Sea Beach Bungalows is probably the best of the bunch with modest but spotless motel style rooms leading straight down to the sand.

Restaurants line both side of the road on Nai Yang Beach with those actually on the beach nicely shaded behind the treeline. They all serve the usual fare of bland international and diluted Thai standards. Prices here though are far more reasonable than on Phuket in general which may be a result of the fact that there are enough of them to create a real competition to attract customers.

In Phuket the Nai Yang Park Restaurant is unique and lots of fun. It sits on its own like a huge quirky wooden chateau near the headquarters of the Sirinat National park with nothing around except green grass and trees through which can be glimpsed the nearby, very empty beach. The sign at the front says it is the ‘Nai Yang Park Resort’ but as the staff explained to me with a smile, this is a mistake since it isn’t a resort at all and has no rooms for rent. They serve western dishes such as grilled beef tenderloin with pepper sauce and the intriguing ‘filet of fish Louisiana’ which is surely a Cajun adventure worth trying. It is the sea food in general which is the most enticing thing on the menu with Phuket Lobster Thermidor at 350 baht per 100 grammes and grilled tiger prawns at a similar price. Their range of Thai food is magnificent and the whole ambiance of the place seems set up to serve large family groups. One of the nicest things about this place is the fact that the staff are genuinely friendly and hospitable in a way that eschews the jaded shoulder-shrugging angst that so often pervades customer service in places set up for mass tourism.

There are a whole slew of restaurants along the beach and they all serve much the same kind of food with tables both on the beach and on on the other side of the beach road. Its hard to pick one out from the throng but the Muyee is as pleasant as any, the beer is cold and the staff are friendly.

The Ban Ra Tree stands out for its decor, its ambiance and its menu. The management quite obviously have some imagination. Its presentation is rustically fashionable and the staff are friendly whilst the prices remain rustically reasonable. They have a happy hour for cocktails between 4pm and 6.30pm. The food is also a step up from the usual and the chef swears by the deep roasted calamari. The other pleasant thing about the Ban Ra Tree is that they don’t have staff trying to drag you in at mealtimes with cries â€œcome in my frieeeeeeeeeeeendâ€, which is a common routine in Phuket. If you find that kind of hustling annoying, the Ban Ra Tree is a nice break where rather than being seen as just another fish to catch, you are credited with free will.