Southern Phuket’s quiet gem, Naiharn Beach has avoided overdevelopment thanks to the presence of a Buddhist temple right on the beach.

Naiharn Beach is a place saved, if not by God, then surely by religion. The reason they haven’t built a hundred resorts and shopping malls here is that it would involve demolishing a temple – Wat Naiharn.

Devout Buddhists take a dim view of people demolishing their holy places even if the cash incentive is vast and Wat Naiharn sits firmly smack-dab-in-the-middle of the beach at the back, like a gilded tribute to genuine Thainess. 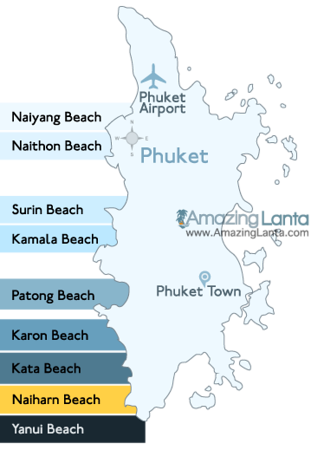 Although Naiharn can get quite crowded, the lack of development actually on the beach means that it feels quieter. A few restaurants sit behind the expanse of beautiful white sand and at either end of the beach are rocks around which one can snorkel.

Naiharn has a few really good resorts, maybe the quietest on Phuket and as with Naithon Beach the service tends to be better, friendlier and more genuine this far from the fleshpots. You will need to rent a motorbike to get around since most hotels are a little way from the beach. You can view all Naiharn Beach hotels available for your specific holiday dates by following the link. The little town a couple of kilometres behind Naiharn has shops, restaurants, bars, massage places and a post office and is one of the nicest urban pockets in all of Phuket. There is not much going on and people seem genuinely relaxed and friendly.

This is more of an estate than a hotel with 23 villas, some of which are actually houses, set in a leafy and quiet garden with ponds and burbling fountains. They have a restaurant, spa, massage place, swimming pool and business centre within the grounds. Its stately home feel is echoed by the rather old world grace of the staff. The villas come in all shapes and sizes and the very un-hotel like set up of the Naiharn Garden Resort makes it a very good option for those who are planning a long stay.

This is a brand new very functional, spick and span guest house. It has everything you need and, as with much of the accommodation around Naiharn you will need to rent a scooter to get to the beach which is about a kilometre away. The rooms are white tiled and whilst not huge, they do have sunny little balconies on which to perch.

The All Seasons is part of a huge luxury hotel chain that ticks all the luxury boxes but despite all the standard boutique flourishes still feels a bit soulless. Having said that it is really the only place that one could describe as being ‘on the beach’ and its a high end option fielding 154 rooms with the efficient management one expect from this international brand. The all mod cons, corporate style could suit those with kids as does the location since it cuts out all logistical hassle and they have a babysitting service and a kids-club. It is also an excellent corporate venue for conferences and seminars since it has all the facilities needed, the area is quiet and the location is beautiful.

Naiharn Beach – On The Rock

At the northern end of the beach and up the rocky hill the ‘On the Rock’ is exactly that and the little rise in altitude seems to make the location a little breezier and cooler than others. It has great views from the basic little restaurant at the front and the whole feel is one of pleasant isolation. It was once in the budget/backpacker bracket, but now all the resorts have upgraded to be firmly in the midrange.

Although it has a slightly institutional feel this is one of the best budget options on Phuket with fan rooms as low as 550 baht in low season and AC rooms under a 1,000 baht in high season. The rooms are large, functional and pleasant if a bit sparse but they are airy and clean. The rooms also have verandahs with a little sitting area outside each one. The hotel faces a small lagoon and one is about half a kilometre away from the beach itself. The hotel rents out small motorcycles for 150 baht to 200 baht a day. If you want peace and quiet with no-nonsense decent accommodation and you are on a tight budget, this is the place to come.

Although, strictly speaking, this is on Ao Sene beach, it is only a short distance from Naiharn. Since one has to cross a promontory to get here it and the resort is the only one around it is uniquely peaceful for Phuket. It has a wonderfully wooded rustic ‘jungle lodge’ feel to it combined with thoughtful design, thatched roofs and great views. If you want to be far away from it all but don’t have time to get to a place like Koh Lanta or Koh Phangan then the Baan Krating will fulfill your needs. It is one of a kind on Phuket. In keeping with the relaxed nature of the resort and its setting the staff are super friendly and laid back.

Naiharn has some of the best restaurants in Phuket scattered about the place with a really good variety of cuisines. Because they are not all packed in together and one is not accosted by touts with menus pulling you in off the street (or even waving down your motorcycle) as they do elsewhere, one also feels that one is not just another passing fish to be snapped up in the welter of restaurant competition. In terms of nightlife Naiharn offers a few bars but things get pretty quiet after 10pm.

On the beach are number of seafood restaurants all of which are pretty much the same. They are all a pleasant place to take a break from the sun and enjoy some fish, crab or fried rice at about 120 baht a plate. They also produce European food that is acceptable at about 200 baht a plate. Above all the beer is cold even on a boiling hot day. And that is what these restaurants are here for all after all…. All this ‘food’ is just window dressing.

The Two Sisters Bar and Restaurant

The Two Sisters is in the little town a couple of kilometers behind the beach. It is brand new and done out with the kind of tropical chic that can be overdone, but when judged correctly, works really well. They serve both Thai and western cuisine and it could be accurately described as a gourmet venue. The chef recommends the penang Curry using imported beef or the beef tenderloin with pepper sauce. They also have a good selection of Australian and Chilean wine. It’s a great little place.

Situated in a line next to each other past the lagoon are the Chez Nous French Bakery, Da Renata Ristorante Italiano, Il Tempo Pizzeria and Los Amigos Cantina. This culinary tour of Latin countries all within a few steps of each other is highly convenient for both the chronically lazy or the chronically undecided. Los Amigos stands out simply because there are not many Mexican restaurants around whereas Italian restaurants almost outnumber noodle stalls on Phuket. With all the usual Tex-Mex standards Los Amigos would be unlikely to cause a storm in El Paso, but it is a passable change from the usual on Naiharn.