Naithon Beach is, quite simply, the most pleasant and peaceful beach on Phuket island. There is little hustle. People are generally friendly and the pace is slow.

Naithon Beach is what the rest of Phuket could look like if the development had been more thoughtful. There is a single street facing the beach. There is white sand (pleasantly squeaky). There are restaurants and there are hotels. In fact there is everything there to serve your needs unless you want lots of noise, booming nightlife and gridlocked traffic.

Naithon has a slightly ‘lost valley’ feel to it surrounded as it is by very steep hills. All approaches to the beach are beautiful giving you a taste of unspoiled jungle, working rubber plantations and, if approaching from the south, some spectacular views from rocky promontories.

High on a hill overlooking Naithon Noi (the small beach just south of Naithon Beach proper) the Andaman White Beach Resort is the place to go if the word ‘exclusive’ figures large in your wish list. It is quiet and leafy and the beach below is exclusively the play ground of you and your fellow guests, since it is the very beautiful private fiefdom of the hotel.

Honeymoons and weddings loom large in the marketing of the Andaman White Beach Resort and, to be fair, you would be hard pushed to find anywhere more romantic to celebrate the tying of the knot. One is quite literally surrounded by jungle so it is also a grand place for ornithologists and lovers of all kinds of flora. They have pool villas, jacuzzi villas and beach suites all thoughtfully designed with a kind of dark wood ‘jungle lodge’ feel. Some might find all this perfection cloying, but the Andaman White Beach Resort is most certainly a success in what it has set out to be. 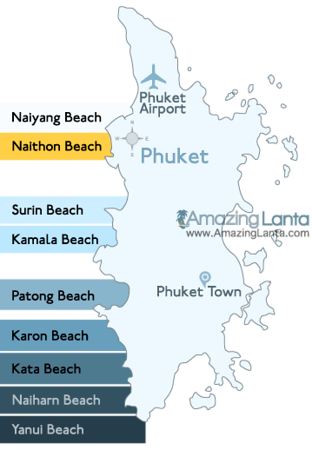 Advertising for the Naithon Beach Resort confidently claims “You exactly gain plenty of unlimited bliss, unforgettable impression from our best willing services. And that reminds you forever.” The somewhat garbled point they are trying to make is a valid one. Its modest but tasteful wooden chalets are set neatly in housing-estate rows. They have a good range of house sizes and they are priced by the view they do or don’t have of the sea.

There are also some excellent low season deals to be had here. Above all the atmosphere is truly friendly and gracious, a tone set quite deliberately by the management who run the operation with considerable thought. The restaurant at the front does a great spaghetti carbonara and goes by the enticing name of ‘Woody’s Paradise’. All in all, the Naithon Beach Resort is an unpretentiously pleasant place and one of the best mid-range options on Phuket.

In Thai the word ‘buri’ means town and given that the Naithonburi Beach Resort describes itself as a ‘hotel complex’ the suffix is not inaccurate. It’s a rambling, airy Italianate kind of city-state with a series of salas and villas around a central (and very large) swimming pool. Its has a ‘pool wing’ and a ‘garden wing’ but they seem to sort of merge into one giant leafy village with shops and a massage place and fitness centre and, quite probably a village mayor and a central prison. With all this space to run around it is the perfect place for kids, and if you have a place by the pool you can always keep an eye on them because they will always be in view. They also have a spa where the advertising promises you will be ‘tickle by fish’, if you like that sort of thing. The staff, once you have tracked them down amongst the foliage, are smiley and pleasant and as with so much on Naithon beach the Naithonburi has none of the aggressive, commercial swagger that so blights other parts of Phuket.

This hotel counts as an extraordinarily good deal. It is a curious place with an almost Dr Who like Tardis facility for giving completely the wrong impression from the outside. It looms into view at the bottom of the hill as you approach the beach from the north east looking sort of narrow and grotty. The staff seem miserable and indifferent and one almost trembles in anticipation of the dusty squalor that awaits. Once you get into the hotel however, it is a different story. The rooms are bright and white and clean with all the little boutique touches that make life worth living (little flower, pointless silk cloths laid artfully about for you to wipe the sand out from between your toes, towels folded to look like amorous swans and lots of bits of wood, usually quite dark). It’s actually a very nice place and the wifi is fast too. Its a very short walk to the beach and they rent out motorbikes in case you get the urge to travel.

In addition to its cluster of above average hotels, Naithon is also home to some very pleasant restaurants both Thai and international. Given its reputation for being ‘exclusive’ they are not expensive either compared to Patong, kamala or Karon. All the hotels have restaurants and most of the restaurants also seem to have a few rooms to let out. ‘Woody’s Paradise’ at the Naithon Beach Resort remains our favourite of the lot only partly because of its absurd name. There is also the issue of very friendly staff serving very good food in a very pleasant atmosphere. Whoever ‘Woody’ is, he quite obviously knows his bacon.

This is not the friendliest place in Naithon but its has a good selection of Thai food at very reasonable prices and it is a good place for lunch and a rest from the mid day sun being dark, cool and shady. They also rent out rooms at 1,200 baht in high season and 1,000 baht in low season. The rooms are nothing special but you are right on the beach at a very reasonable price. They don’t, however, have wifi and in this day and age that is kind of unforgivable.

Funky, Italian and packed with Russians, this glorious little eatery bucks the trend of dreariness one normally associates with the endless parade of Italian restaurants on Phuket whose only claim to authenticity seems to be a genuine Italian flag on the shop’s sign. Well that and overcooked genuine lukewarm stodge masquerading as ‘pasta’ served on a genuine plate made of something solid. The Macarona is half inside and half outside on a pleasant and airy ochre tiled terrace. The beer is cool and the food is delicious and genuinely very Italian. The Bisteca di Pollo is standout. It also functions as a hotel and although the rooms are small, they are brand new and you are right on the beach for a fairly reasonable price especially in low season. The staff also speak very good Russian.