Phuket’s many beaches range from beautifully peaceful to horribly overdeveloped. In the far north of the island and the far south one can still find quiet places to contemplate white sand, good sea food and stunning scenery. For those seeking peace and relaxation, here are some suggestions about the best Phuket beaches

Northern Phuket is very firmly separated from the main tourist areas of the island both physically, the hills being very steep, and in spirit, the whole atmosphere being utterly different to the bustling, manic fleshpots of Patong or Karon. The traffic is also a great deal more sparse and the driving lacking in aggression. To get to the beaches one passes through forests where serried ranks of rubber trees cause javelins of light to dapple across the road. There are villages, temples, mosques, markets and local people going about their business most of which has nothing to do with tourism.

Naithon Beach is what the rest of Phuket could look like if the development had been more thoughtful. There is a single street facing the beach. There is white sand (pleasantly squeaky). There are restaurants and there are hotels. In fact there is everything there to serve your needs unless you want lots of noise, booming nightlife and gridlocked traffic.

In the far north of Phuket is Nai Yang beach. It is near enough to the airport that one can sit and watch the planes arriving and departing although one is not close enough to be disturbed by the noise they make. It is far away from being a typical tourist brochure, antiseptic, palm fringed paradise, but it is very pleasant the huge expanses of white sand lined by weirdly shaggy Casuarina trees.

In the same way that heading north of Surin Beach takes you out of the most crowded, over developed and traffic ridden zones of Phuket, one can also say the same thing about heading south of Kata where again big hills mark a clear change in mood. South of that line is Naiharn Beach and the tiny Ao Sene. Whilst Naiharn is popular, the pace is slower, the development is less rampant and the hectic commercialism more tempered by grace.

Naiharn Beach remains underdeveloped due to the presence of the temple Wat Naiharn right by the beach. Although Naiharn can get quite crowded, the lack of development actually on the beach means that it feels quieter. A few restaurants sit behind the expanse of beautiful white sand and at either end of the beach are rocks around which one can snorkel. 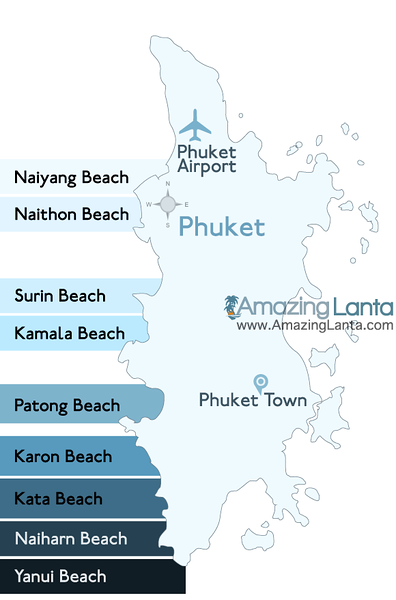