August 2022: No quarantine or PCR test needed to enter Thailand.
See our Can I Travel To Koh Lanta page for full details.

Only a few kilometres away from popular Ao Nang, Ao Nammao Bay is a complete contrast – a hidden gem not many people know about that’s still largely undeveloped. 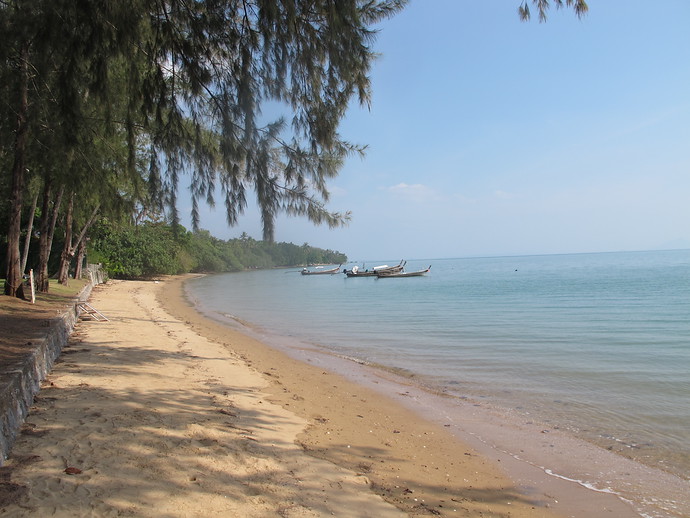 Ao Nammao (also known as Ao Num Mao) boasts no mainstream nightlife or shopping centres. Only a few shops and restaurants are dotted along the main road which then leads on into Ao Nang. It offers a quiet, private, relaxing, peaceful vacation where you can base yourself to explore the Krabi region or simply relax Ao Nammao’s deserted beaches.

You can not walk along the full extent of Ao Nammao’s beach as it is naturally divided by trees and rocky outcroppings. This helps create smaller bays making each one more private and tranquil. The only noise may be a passing longtail boat taking people to Railay Beach ,Ao Nang or the prayer to call from the local mosque.

Where To Stay On Ao Nammao Bay

Ao Nammao Bay has some of Krabi’s best-equipped luxury beachfront villas – perfect for large groups, and there’s also cheap and cheerful accommodation found along the roadside. Wherever you choose stay you won’t be bothered with crowds as the accommodation is vey much spread out from each other and with less development there are no large hotel chains, only small properties with limited number of rooms.

Heaven 7 is a small themed hill side dedicated to kids. It includes a bouncy castle, ferris wheel, carousel and giant chessboard, and some random objects like a scaled down model airplane which you would never expect on a Krabi hillside. It’s great for smaller kids and for adults, the view from the hillside is amazing.

Fossil Shell beach is estimated to be around 40 million years old. It was a freshwater marsh populated by two centimeters long pond snails and clams which multiplied in such numbers that the dead formed a floor for the living. This process repeated and led to the creation of layer of fossils about 40 cms thick which can now been seen in the rock formation. The area not only has the fossils but a nice tranquil area on the hill over looking the sea where Thai people sometime picnic. You can read Fossil Shell Beach customer reviews on TripAdvisor.